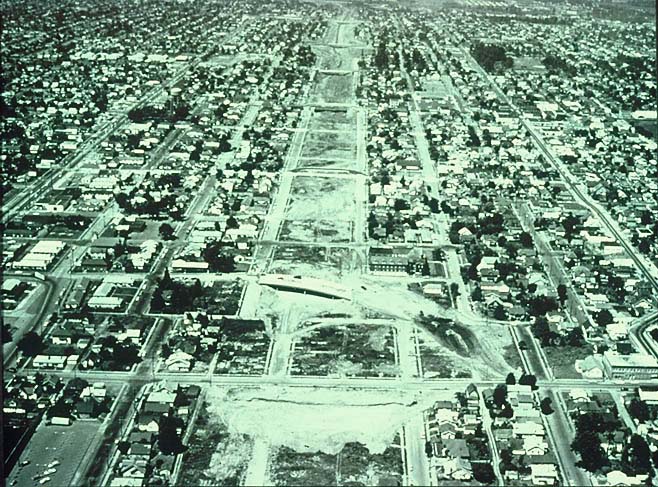 Unknown to many Portlanders is the fact that many of our highways have names beyond their official designations. A few of the traffic reporters in the local news still throw out names like “Banfield,” and “Sunset,” during their reports but several other names have long faded into obscurity.

In Oregon, there are three specific periods when it comes to highways. Oregon was the first state to pass a tax on gasoline in 1919, with the money dedicated to improving highways in Oregon for travel. Many highways were built with this money, many of which are still in use today. These highways mostly connected one town with another, but the ambitious Pacific Highway was built during this period.

While Oregon’s ambitious highway system proved it’s worth during WWII in supplying the needs of local war efforts, the entire system was showing it’s age. The Depression removed a lot of money for repairs and expansions, and during WWII Congress forbade any road construction pass what was necessary for the war effort. Spurned by the support of Robert H. “Sam” Baldock, the Oregon State Highway Engineer, and the strong support of Thomas H. Banfield, the Oregon legislature gave OSHD the authority to build grade-separated and controlled-access routes in 1947. The Oregon Legislature continued to pass laws and budgets to support this ambitious project well into 1949.

This also marked a turn in “modern” highway design. Previous highways could have stop lights, rail road crossing, and businesses on each side to attract travelers. Unfortunately these could cause major backups for miles along the highway. The new grade-separated and controlled-access design was meant to eliminate these backups and more efficiently move traffic between points.

By the late 1960’s and early 1970’s the “Freeway Revolts” were well under way not only across America, but around the world. Portland was at the fore front of these for a variety of reasons. The original 1950’s six freeway plan (and the follow up plan of 50 freeways by 1990,) were effectively scrapped. This left two Freeways uncompleted, and led to the complete removal of another.

These original revolts, which lead to Oregon’s Urban Growth Boundary law are credited around the world in keeping sprawl in Portland to a minimum and directly leads to it’s high livability scores.

On to Part Two