Guild Wars 2 Champion Trains are no doubt contrary to the developer’s wishes on how Guild Wars 2 should be played. But from the players’ viewpoint, they’re a quick way to level characters, get nice loot, get karma, and get Daily and Monthly Achievements out of the way.

Below is a list of Champion Trains with waypoints. If you know of any that are NOT on this list, or have a correction, please comment below.

Lornar’s Pass Champion Train (Levels 25-40)
While Lornar’s Pass has a lot of champions, they do not spawn predictably at this time. If you have a pattern for them, please post in the comments below. Thank you!

1.) Frostmaw [Stonescatter Waypoint]
Head north towards [Bearstone Shrine]. He spawns in the flat area to the east.

4.) Champion Steam Commander[Pinnacle Enclave Waypoint]
He actually originates at another location, but frequently ends up right at this waypoint .

Iron Marches Champion Train (Levels 50-60)
1.) Champion Drakin Cinderspire (Fire Shaman and Minions) [Gladefall Waypoint]
Head southeast over the bridge then curve around to the Northwest. The champion is at the North end of the Scorchlands. There is a break in the wall just south of the Scorchlands Vista that can be jumped through. Kill all the Ember and Fire Elemental Minions in the area before attacking the Shaman, do this three times. 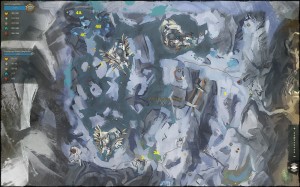 1.) Wurm [Dimotiki Waypoint]
Jump off the ice flow and starting swimming down and slightly to the North East. The Wurm at the bottom of a chasm in the sea.

2.) Drake [Skyheight Steading Waypoint]
Head north out the gates and angle slightly west around the cliff. The Drake will spawn in a nest area straight ahead.

2A.) Quaggen
Will spawn near the Drake to the North East. Has a long spawn time, so it only appears about every five rotations.

4.) “Trio” [Drakkar Waypoint]
The Trio has a long spawn time and will come up about every second or third rotation through the other Champions. It consists of three Champs. If all three can be killed within the time limit (currently ten minutes,) then an extra chest is given as a reward.