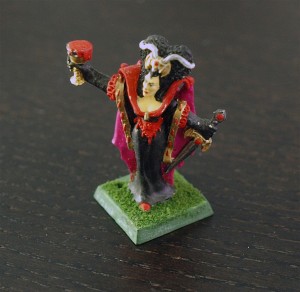 “Isabella von Drak was the only daughter of Otto von Drak, count of Sylvania. In 1797 IC, Otto lay in his death bed and vowed that he would rather see his daughter marry a Daemon of Chaos than let his inheritence fall into the hands of his brother, Leopold. Soon after, a black coach stopped in front of Castle Drakenhof and out stepped a stranger. The stranger, Vlad von Carstein, claims Isabella’s hand and her father, who might have regretted his cursing, could not but oblige. Priest Victor Guttman, who had been called to shrive Otto, immediately married them. Soon after Otto died and Leopold was thrown from the highest tower to his dead, the priest disappeared.
What had started as a marriage of convenience developed into something far more and Isabella soon demanded that Vlad would give her the Blood Kiss. Vlad long resisted her request untill Isabella fell to a fatal wasting illness. When one of the physicians stated her dead -her heart had stopped beating- Vlad denied it and dismissed the man. Three days, Vlad and Isabella locked themselves up inside their room and on the third day, Isabella emerged, alive. Ever afterwards, she was pale and wan and only seen outdoors by night. Vlad could not stand the prospect of a life without her and had eventually given her the gift of undeath.

In the years to come as Vlad and Isabella ruled Sylvania and in the ensuing Wars of the Vampire Counts, Isabella was Vlad’s confidante and the only person whose advice he valued and trusted. She was also the one who could temper her husbands fits of rage.

When Vlad eventually died at the siege of Altdorf in 2051 IC, Isabella was taken by grief and threw herself on a wooden stake after which she crumbled to dust in front of Ludwig, the Count of Altdorf.”

She is part of Games Workshop’s Vampire Counts Army. Her full bloody history is told in the novels, Inheritance, Dominion and Retribution all by Steven Savile